You are here: Home / Blog / How much power does your clipper/shaver REALLY need? 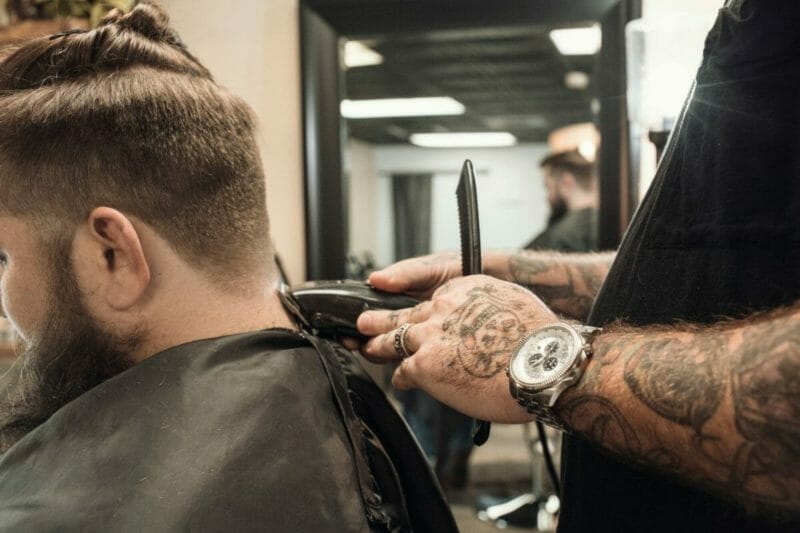 Recently we set up and did some measurements on several popular high-end clippers.  Our analysis is published below!

Here is the Executive Summary:

The first two devices listed above DO need both voltage and frequency conversion to operate outside of North America. And, both are easily powered by Athena.

The Oster Model 10 is a story in itself.  The bottom line story is that we recommend it be powered by Athena. To understand why, read down to the bottom of this blog.

However, the BaByliss model above does not require any converter because it is specified as universal.  In other words, it can be used anywhere in the world!  Thus, the BaByliss is an easy going travel companion, as long as you like how it works and feels for you, which is outside the scope of this blog.

Now for the details:

The Wahl Balding Clipper.  The Wahl’s power draw is a lesson in VA, power, and power factor.  It could get technical, so we’ll try to keep it simple.  Here we go!

Any electronic device converts electricity to some other form of energy to do work.  Electricity supplied from the wall outlet is AC (alternating current waves), which means that the voltage and current have both magnitude and direction of travel (technically called phase), much like waves on the water do.  Voltage and current waves are in phase when you are powering something that generates heat, such as an incandescent light bulb.

When you are powering a motor, the voltage and current that the motor requires are sometimes far out of phase with each other since electromagnetic motors often store more energy than they use (as magnetism) and push it back at the power source!  A motor will often contain a large coil that stores magnetic energy and delivers a small part of this energy to the clipper heads as back-and-forth motion, but sends a lot more of it back to the power source.  A measure of the energy sent back is called “VA.”

Thus, in addition to measuring the power in watts, we need to account for “VA.” This number will often be larger than the power rating since these electromagnetic coils can store MUCH more energy than they need to move the small blades!  The power converter we purchase to drive the device has to be able to handle this “VA” energy being sent back at it.

So, now that the electronics lesson is done, let’s measure the Wahl.  At 115V AC 60Hz, the Wahl requires 9 watts to operate.  Now we measure the apparent power, or VA.  It measures 37VA!  So this is why we recommend the KCC Scientific Athena for the challenge.  Chronos could handle the power, but not the VA.  The result would be a distorted power waveform, and unnecessary stress on Chronos.  But Athena handles the job with ease.

How could you know that it’s not just the Watts that matter; it is also VA?  And, the clipper manufacturers don’t even tell you what the VA rating is!  It’s also the reason why many voltage converters burn up powering clippers that their wattage ratings suggest they can handle.  So now you see why we are publishing this blog.

The Andis Master ML.  The Andis is very similar to the Wahl, because it has a virtually identical (at least, electrically) motor.  So here are our measurements.  At 115V AC 60Hz, the Andis requires 11.3 watts to operate.  Again, the VA rating comes in much higher, this time at 33.1 VA.  For the same reason as explained for Wahl, Athena is the unit of choice for powering this clipper.

For both the Wahl and Andis, there is no way to power these devices with 50Hz.  They will frighten you!  They will clash and clatter and scream at you for the right frequency!  You would never want to put them anywhere near your head for fear of what they would do to you.  That is because the lower frequency allows the shaving heads to bang against their mechanical end-of-travel stops, where 60Hz gets them going back the other way before they hit the end-of-travel stops.  This certainly cannot be good for the clipper’s health, either.

The Oster Model 10 Challenge! The Oster Model 10 needs voltage conversion to operate outside the USA, but will operate at 115V 50Hz despite its published rating.  We have observed that it performs much better (and cooler in the hand) on 115V 60Hz, but it will function on 115V 50Hz.

Based on this, you might be tempted to ignore frequency conversion if you own the Oster Model 10.  The problem will be finding a portable voltage converter with enough power to handle the Oster Model 10 outside North America, where the standard voltage is 230V (which could damage the Oster Model 10!).  The device uses rather thick lubrication internally, which takes a few moments to warm up.  During this warm up period, it will require almost 60 watts to operate the Model 10, as it gradually drops to 50 watts, then settles in to just under 40 watts (its specification) once it loosens up.

Many travel voltage transformers will struggle to start the Model 10.  However, the KCC Scientific Athena can provide both the voltage and frequency conversion to do it.  This will assure the specified performance from the Model 10, since it will be operating on 115V AC at exactly 60Hz.  If the Model 10 is cold, Athena might power cycle once (harmlessly) the first time you power the Model 10 with her, but she can and will power the device on the second start.  The Model 10 is indeed a beast to power–mostly because of the thick lubrication and the resulting stubborn start up.

Although Thor is not a good suitcase-portable solution, it will power the Model 10 effortlessly, cold or hot, new or old, all day and all night.  Thor is great if you are looking for a solution for the home or salon.

Oh, and by the way, the Oster Model 10 requires nearly the same VA as it does Watts.  We know everything we need to know about powering the Model 10 from the wattage we measured.  Very intriguing!  Why is it the same?  Because the Model 10 is a special kind of motor:  it is a brushed DC motor, which (because of the way it’s built) turns out to behave more like a resistive load (like a light bulb) than the Wahl and Andis, which have AC energy-storing coils as motors.

Your trusted source for high-precision voltage and frequency converters designed to help valued electronic devices stay up and running during these critical times.